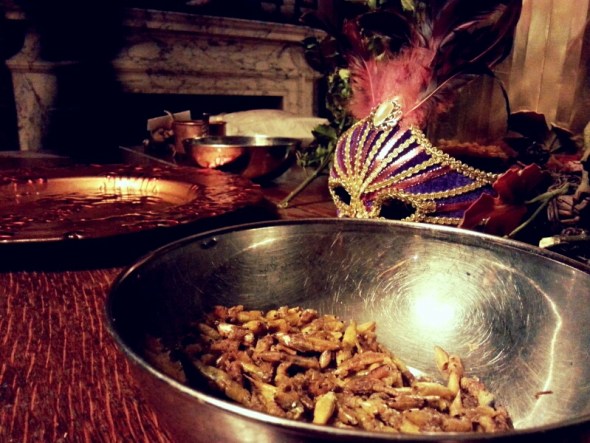 WELCOME2THEBRONX:  Insects & Small Game On The Menu Make For A Big, Unforgettable Experience in The Bronx by Ed Garcia Conde

A bowl of delicious Nsenene / ©Welcome2TheBronx

When Baron Ambrosia sends you an invitation, you immediately RSVP — no questions asked.

With a menu consisting of Cricket Brie Sushi, Spicy Beaver Tacos, Muskrat Fakoye & other exotic dishes, Baron Ambrosia, the culinary ambassador of The Bronx, hosted an unforgettable epicurean experience which would have made Andrew Zimmern feel proud.

This past Saturday at the Andrew Freedman Home, The Baron held the 4th Annual Bronx Pipe Smoking Society Small Game Dinner —an event which has quickly become one of the most highly anticipated and exclusive dining experiences in the Bronx.

Four years ago, I was one of the select few of about 20, brave and intrepid souls, to partake in the very first invitation only event which was held on a snowy winter’s night at the abandoned Old Bronx Courthouse in Melrose.

Saturday night was a marked departure from the first which was held in a cavernous and freezing courtroom in an empty shell of a building with no heat. It was held in the warm and cozy embrace of the historic Andrew Freedman mansion and the number of attendees had at least tripled in size.

The evening began with cocktail hour in the old mansion’s barroom and was hosted by Bun Lai of Miya’s Sushi of New Haven, Connecticut.

With small game for the evening provided by Boss Bill Guiles & Trapper Jim DeStefano and insects by World Ento (a supplier of edible insects in the US) Chef Bun Lai created a wondrous selection of sushi platters. Each platter was a burst of both traditional and exotic fair.

After cocktail hour, we were asked to assemble in the library for appetizers, where renowned and beloved Bronx artist, Daniel Hauben (who’s artwork is currently being exhibited at the Andrew Freedman Home but more on that in another post) was painting a portrait of the evening.

Spicy Beaver Tacos were served up by Jason Engdahl of Brooklyn with a helping of chipotle and jalapeno cabbage.  The porcupine was served up nam tok style and prepared by Siam Square Thai restaurant of the Bronx, Meow Meow Sliders (no, not that kind of cat but Fisher Cat). Elk was also provided (it wasn’t any different from venison) and the most exotic of this portion of the evening was nsenene, a Ugandan delicacy which is long-horned bush cricket. The nsenene were so good I couldn’t stop munching on them.

The guests were just as colorful and varied as was the menu.  In the invitation, Baron Ambrosia informed us that the, “dress code was formal with the options being black tie, traditional or warrior.” He went on to say in the invitation that, “…If you’re part of a sect, society, crew, or military branch, wear your colors, sashes, badges, medals, beads, taxidermy, bones, & mojo bags proudly.  Large blades are welcome; swords, machetes, spears, etc.”

And the guests did not disappoint in taking his edict seriously.

When the time came for the main course, we were ushered into main gallery area of the Andrew Freedman Home which was transformed into the dining area.  The Baron had each chef for the main course come up and describe their delectable dishes.  Five of the chefs were from the Bronx.

Rafael Mata of the beloved Xochimilco Mexican restaurant of Melrose, cooked up the Coyote Enchipotlado. The Garifuna Possum Hudutu was whipped up by Chef Callita Diego, while Assetou Sy & Tata Maiga of the Malian Cultural Center of the Bronx made the Muskrat Fakoye.  A nascent Bronx Jamaican catering company provided a delicious side dish of vegetables and bacon, commonly referred to as a cook-up (or bitch-up if you really want to get technical).

Baron Ambrosia also took this moment to explain one of the reasons for this event and that is to help us rethink our food and is source, seeking out more sustainable sources of food, including small game in our own regional backyards as well as nutritious insects (which, by the way, are eaten by roughly 50% of the global population).

No dinner would be complete without dessert and not to be outdone by the cocktail hour, appetizers and main course, Bronx-based dessert company, Whoopies Miniature Desserts, headed by Bronxite, John Denizard, provided excellent treats. Unlike anything else on the evening’s menu, this is something you can sample at any time so make sure you head on over to their website and contact them!

The entire evening was full of surprises, characters, great company, music, dancing, and great food.  There really is nothing this fun and exciting in The Bronx, like the Annual Bronx Pipe Smoking Society Small Game Dinner and perhaps all of New York City.  One guest likened the event and its guests to a scene from the Hunger Games and I couldn’t agree more of the festive atmosphere at the Andrew Freedman Home.

I’m already looking forward to next year and hopefully being lucky enough to secure another invitation.