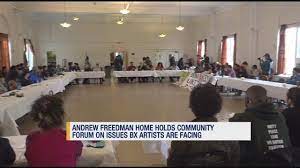 News12 The Bronx:  Forum addresses concerns in wake of ‘It’s The Bronx’ cancellation

A community forum was held Sunday at the Andrew Freedman Home over community concerns in the wake of the cancellation of the "It's The Bronx" event last month.

Organizers say they wanted the focal point of the discussion to be about larger issues that the borough faces, including the lack of resources for artists and gentrification.

It's The Bronx was supposed to be an event showcasing Bronx talent in March, but the Andrew Freedman Home pulled out, leaving it without a venue. Some say it was a result of backlash from protesters like the group Hydro Punk.

But Walter Puryear, of the Andrew Freedman Home, says there were more reasons considered, including artist representation, concerns with It's The Bronx on how work would be installed, making sure things were done properly and artist insurance. He said that for example, in their inexperience in the past, something was damaged and they felt a responsibility to pay for it.

Puryear says the forum was about the arts, social responsibility and how the borough can grow together.

Hydro Punk, a group catering to local artists, was also in attendance. Both sides were hoping to come up with ideas on how to move forward.