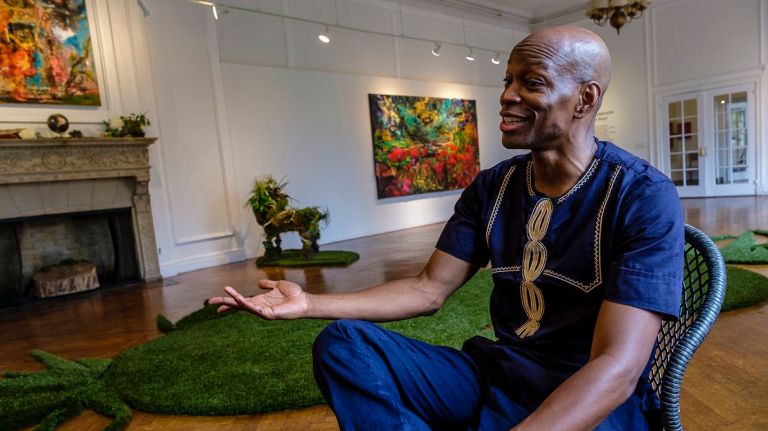 Beyond a bucolic garden, expansive terrace and limestone facade, the Andrew Freedman Home houses stacks of electronics, sweeping paintings and collages capturing iconic architecture along the Grand Concourse below.

Artists work in the private quarters of the 1920s era mansion — their studios dedicated to everything from the Decentralus blockchain mining lab to sound engineering.

Before the Italian Renaissance-inspired manor offered studio space, the Andrew Freedman Home provided a haven for wealthy people, who lost their fortune, but wanted to maintain their luxurious lifestyle in their final years. The Mid-Bronx Senior Citizens Council (MBSCC) purchased the property, at 1125 Grand Concourse, in 1984 while the home — weathering financial struggles itself — sought to relocate.

In 2012, five years after the MBSCC’s own adult home closed in the landmarked mansion, the space was transformed into a cultural art center. After operating on a roughly $700,000 annual budget, the home is now slated to receive $1.7 million in state funding for infrastructure improvements that will open swaths of currently uninhabitable space.

“This really should be something that helps revitalize this part of the Bronx … that serves both the neighborhood and the larger community — that’s what we’re looking to do,” said MBSCC’s executive director Jeanette Puryear, noting the home is looking to secure more funding. “It’s going to need more than $1.7 million.” 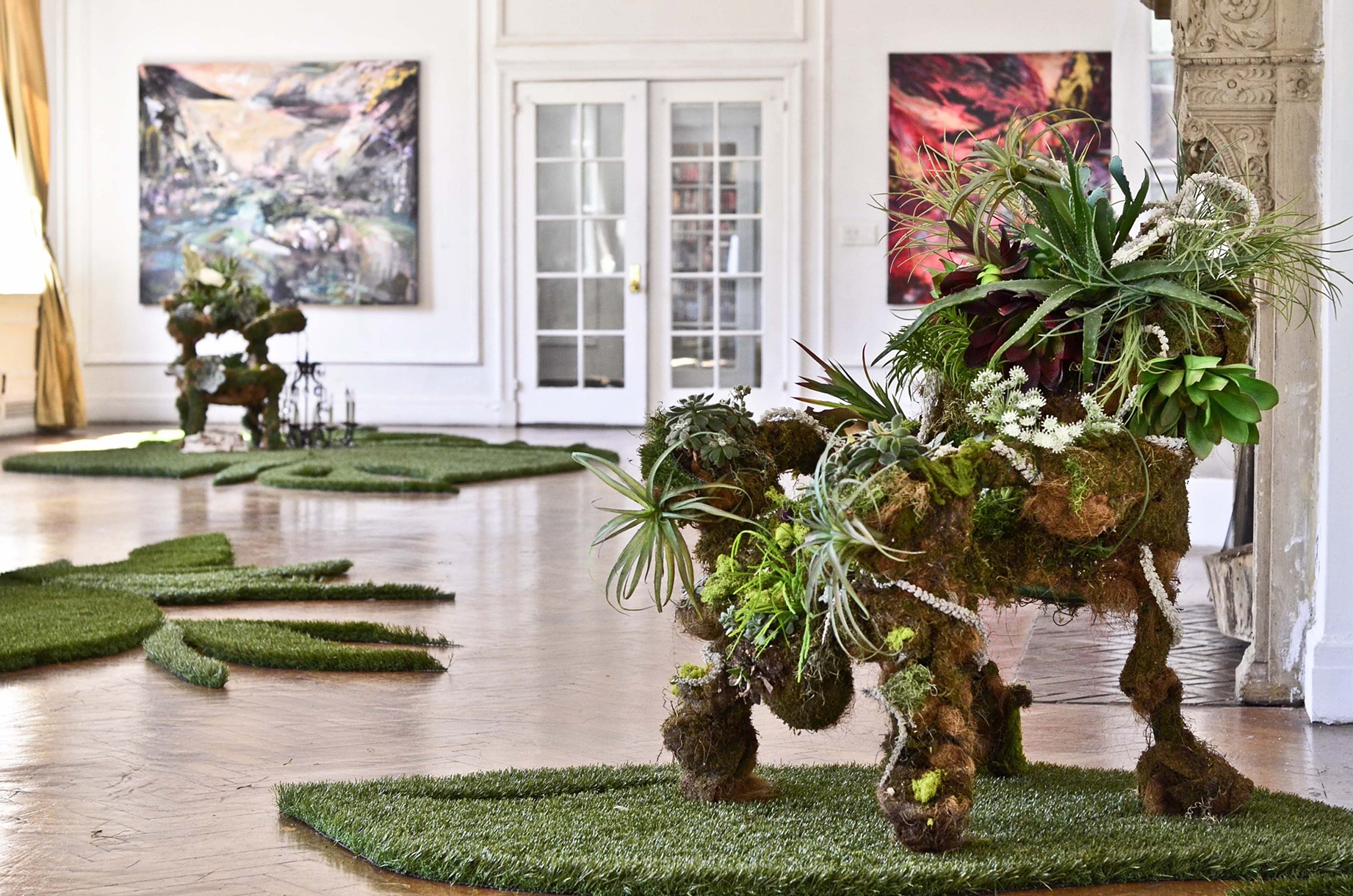 The desire to shield seniors from financial pressures pushed Andrew Freedman, a real estate mogul, to plan the home in the early 20th century. Freedman became convinced financial hardship was more difficult for people once they were accustomed to a higher standard of living when his parents fell into poverty, his sister told reporters. He vowed to help such seniors if he became rich, according to the MBSCC.

Freedman ascended to affluence — he helped finance the city’s first subway line, but was also believed to have colluded with corrupt Tammany Hall bosses. And he opted to set aside $5 million in his will to lodge once-affluent seniors, according to the city’s Landmarks Preservation Commission.

The home’s trustees purchased a plot on the Grand Concourse in 1917, and commissioned architects Joseph Freedlander and Harry Allan Jacobs to design the home, according to the Landmarks Preservation Commission. The mansion made its debut in 1924 and later expanded with two wings. A former czarist general and faded Edwardian actress were among the many that moved into the manor, according to Bronx borough historian, Lloyd Ultan.

“It was an unusual idea — even back then,” Ultan said. “I don’t know of any other institution like that, that ever existed.”

The endowment dwindled, and the home began asking for rent and other support from an increasingly common clientele, according to Walter Puryear, senior director of the Andrew Freedman Home Initiative at MBSCC.

His mother, Jeanette Puryear, often admired the mansion while working at the YMHA on the other side of the Grand Concourse. She wandered over one day and learned the home was slowly moving out inhabitants, with the goal of selling the mansion and starting a successor in Westchester County.

“It was a lovely, lovely old building,” said Jeanette Puryear, who helped found MBSCC during the 1970s. “But they had no buyers … the Bronx was really going through a great deal of deterioration.”

MBSCC gathered grants and purchased the home in 1984 for around $1.3 or $1.4 million, with half of its mortgage waived, Jeanette Puryear said. The council ran an adult home there until mounting costs forced it to close in 2007.

Ushering in a creative crowd

Although he was never enrolled in its early education programs, Walter Puryear grew up visiting the Andrew Freedman Home with his mother.

Years later, experiences abroad inspired him to turn the home into a cultural art center. He was particularly struck by local arts organizations in Japan and a group of 15,000 untouchables in Delhi that created a self-sustaining trade and ecosystem because the caste system limited their options elsewhere.

“I was like, ‘Why doesn’t the Bronx have that?’” said Walter Puryear. “I don’t see that being very different from the Bronx … it’s a community of day laborers, immigrants — a lot of them from the Caribbean, from Africa, but from all over the world. It’s been in a certain economic level for a very long time — one of the poorest places nationally.”

Walter Puryear, who has a background in theater and education, partnered with No Longer Empty and several Bronx organizations on the home’s 2012 art foray. The breakout exhibit, called “This Side of Paradise,” focused on the Bronx’s evolution from its ritzy past.

The cultural center started offering two-year residencies to artists, who get a free studio in exchange for teaching classes and workshops and participating in exhibits and performances. At any given time, the home has welcomed 14 to 21 residents, according to Walter Puryear.

In all, some 16,000 visit the home annually for various activities, including several youth programs and workforce development trainings focused on carpentry and electrical, plumbing and hospitality skills.

Starting next spring, the state grant will allow the home to enhance its programs and renovate parts of the building that have not been used for years.

Some of the funding will go toward signs designed to make the estate more inviting to those on the other side of its black, metal gate. On the southern end of the property, one of the home’s residents, Natalie Collette Wood, will add a mosaic depicting large, lush aloe leaves, which Wood envisions complementing the fish mosaic on a nearby apartment building.

The funding will also benefit the garden, where Walter Puryear anticipates people canning produce, learning recipes from visiting chefs, and, possibly, partaking in a farm-to-table operation.

On the first floor, he plans to rehabilitate the grand ballroom so it is suitable for dancing, acting and other performances. The ballroom and other ground-level spaces are also slated to get new lighting, a sound system and central air conditioning, according to Walter Puryear.

Upstairs, the funding will facilitate the creation of a 22,000 square-foot space by combining some of the aging bedrooms. Walter Puryear said this will become an arts entrepreneurial incubator and training space, including for those looking to become art handlers.

MBSCC realized there may be demand for its workforce development graduates in the art world after relying on those specializing in construction to set up and take down exhibits.

“Why not apply it to another (industry), where your entry level rate of pay is double, triple,” Walter Puryear said. As its centennial approaches, MBSCC may even return to the Andrew Freedman Home’s residential roots. Walter Puryear said he has been speaking with developers about restoring the apartments in a way that would benefit nearby residents.

“We’re not departing at all from what he originally intended,” Walter Puryear said, noting that the mansion traditionally overlooked financial requirements and admitted artists, while expecting inhabitants to contribute to the community. “It’s just the focus of people.”