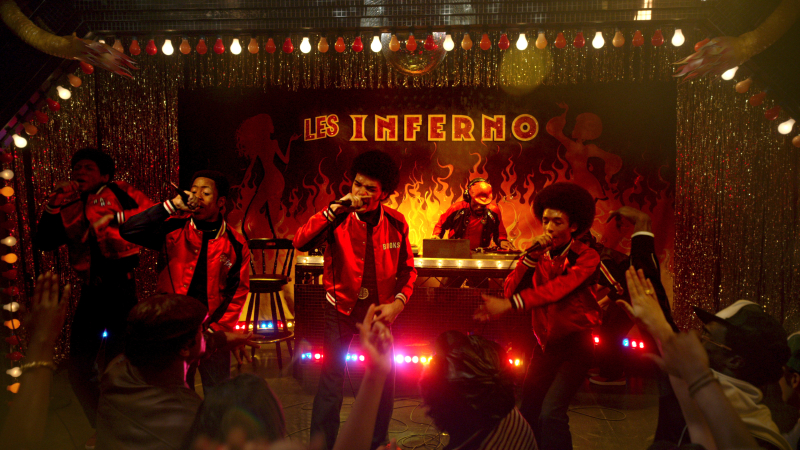 IndieWire:  ‘The Get Down’: How Baz Luhrmann and Flash Recreated Hip-Hop in the Bronx by Bill Desowitz

For production designer Karen Murphy and composer Elliott Wheeler, “The Get Down” was a far cry from the fantastical liberties taken with “The Great Gatsby.” Fulfilling Baz Luhrmann’s ambitious vision — recreating the rise of hip-hop in the burned-out wasteland of the late ’70s South Bronx — required a special authenticity. They had to immerse themselves in the revolutionary time and place before mastering “The Get Down,” inspired by hip-hop DJing, cutting, and mixing legend Grandmaster Flash.

The expensive musical extravaganza (cancelled by Netflix after its first season) was a wild convergence of music, politics, and rebellion. The series not only focused on teens from the South Bronx with larger aspirations than graffiti art, who become “The Get Down Brothers,” but complicated their lives with an unrequited love story, hampered by disapproving parents.

Then came location scouting. But because the South Bronx has changed so drastically, Murphy and the team had little to choose from. They managed to use St. Mary’s Park in Mott Haven and the Andrew Freedman Home on the Grand Concourse. “It has a lot of history,” said Murphy. “We used the interior and exterior and put graffiti all over it and made it into an abandoned-looking squat.”

But they had to go farther north in the Bronx for the iconic church located at a train crossroads, and found train tunnels and rubble fields in East New York. Murphy also scoured rooftops “where we could see views down to Manhattan, which was important because the boys are always talking about making it downtown,” she said. The production designer additionally had many discussions with the legendary Flash about his gear. “He used to doctor a lot of the albums that he would find and would rip one side of the headphones off because it was superfluous and bend the metal. He altered the mixers and turntables to his own liking,” said Murphy. “So we made sure it was authentic and spoke to these people. What was in the bedroom? That’s where he did the soldering.” And every piece of graffiti that they designed had to belong to the music because it reflected financial instability, cultural disenfranchisement, and the forgotten Bronx.

Getting Flash into the Mix

When it came to getting a better understanding of the music, Wheeler was blessed not only with the invaluable expertise of Flash but also with personal details supplied by Rahiem from the Furious Five, DJ Kool Herc, and Jazzy Jay. And this time out, Luhrmann threw down the gauntlet: Without the musical numbers, the whole story should fall apart.

“Talking to the people at the time helped create the through-line,” Wheeler said. “Flash would come along to the set and the speakers that you see in the first Get Down Brothers vs. Notorious 3 battle are modeled on the ones that Flash himself built. “It was the same with musical sets. What would you have played during that time? He’d go, ‘Elliott, they’re my babies, a DJ doesn’t give away that information to anyone.’ They’d spend so much time searching them out in the city and then protecting them. Then he gave the information willingly, and Sony opened up their entire vault so Flash could go into these original multi-tracks and pull out all of these songs that he wanted to remix for all these years. He’d take the elements, remix that, and give that to me, and I’d do
orchestral scores with it weave those elements back and forth.”

This experience helped inform the composer’s own themes as well. Shaolin Fantastic (Shameik Moore), a combination of Flash, Super Fly, and Bruce Lee, had an ultra-stylized quality that’s reflected in the score. And the love story contains a more intimate and classical-sounding theme.

“Watching Flash on the decks is like watching someone play a Straparius,” Wheeler said. “And the connection that he allowed us to access was remarkable as well. He brought in Raheim and he was a massive part of our storytelling process. We’d come in with a rough outline but obviously no one knows the modalities of how rap sounded better than the people who were there, so Raheim would take our story lines and make it flow into those rhythms.”