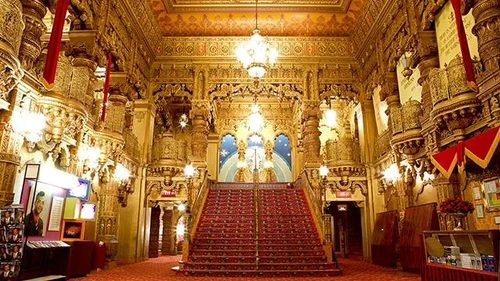 On October 15th and 16th, the non-profit cultural organization Open House New York hosted their 14th annual OHNY Weekend, a two-day cultural event inviting visitors to visit hundreds of important NYC cultural sites. Amongst the over 275 sites included in this year’s edition, many of which aren’t normally open to the public or whose access is otherwise restricted, were ten particularly poignant locales organized and curated by ARTNOIR, a cultural collective that sponsors artistic events around the world.

One of the most interesting sites of ARTNOIR: City of Cultural Exchange was the only site in Brooklyn, The Black Lady Theatre – Slave II. Once a center of black activism that hosted town meetings, think tank gatherings, and an array of artistic events for the surrounding community, the Crown Heights theatre closed down in 1998, largely due to the depleting health of its founder, Judge John L. Phillips Jr. Nearly 20 years later, ARTNOIR re-opened the space for the weekend, allowing visitors to view its original glory and in particular, its large and highly detailed murals. Marking the OHNY event was live reggae and jazz music, vendors selling exotic wares, and a natural hair show. Although the OHNY Weekend re-opening was temporary, there are rumors of the space being permanently revitalized in the near future.

Heading up to the Bronx, the former home of 19th century New York businessman Andrew Freedman became another venue of cultural exploration during the weekend event. Unlike The Black Lady Theatre, Andrew Freedman’s home is still active today functioning as an emerging art space that hosts a number of artists-in-residence, rather than as a business magnate’s permanent residence. For OHNY WEEKEND, the work of the artists-in-residence was on display, accompanied by performances from Bronx Afro Caribbean rhythmic music group BombaYo.

High up in Washington Heights is United Palace, another OHNY Weekend destination and also the 4th largest theater in Manhattan, able to accommodate upwards of 3,400 people. Constructed in 1930, the United Palace once championed vaudeville performances and also functioned as a luxurious, high-end movie theater. Today, its golden, chandelier-equipped halls see limited use as a performance venue and as an occasional movie theater screening classics from Hollywood’s Golden Age. For OHNY Weekend, the doors of the United Palace were opened not for a performance, but for a series of guided tours of the opulent and well-maintained theater.

Queens, the last borough represented in ARTNOIR: City of Cultural Exchange, held three of the event’s ten sites, including guided tours of Louis Armstrong’s former house and tours of Robert Moses and Raymond Lester Associates’ famous Panorama of the City of New York, a 10,000 square foot miniature replica of New York City housed in the permanent collection of the Queens Museum. The third and final site in Queens was the Lewis Latimer House, the former Flushing home of the African-American inventor best known for contributing important advancements to the incandescent lightbulb in the late 19th century. It now operates as a museum, and ARTNOIR and OHNY offered a tour of the house and overview of Latimer’s life for curious visitors willing to trek to Flushing during the event weekend.

Although this year’s edition of OHNY Weekend and ARTNOIR: City of Cultural Exchange have come to an end, documentation on the events can be found on the Open House New York website. For more information about ARTNOIR, click here.

Artists, Movements, and Exhibitions to Celebrate This Black History Month