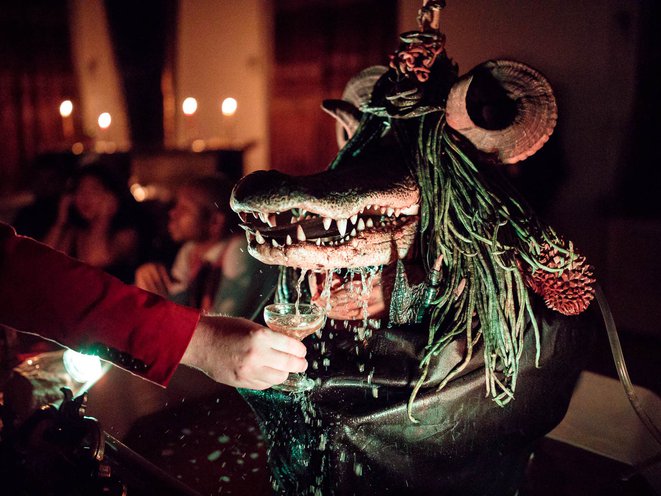 It's been raining for nearly 24 hours when I arrive Saturday night at the gates of the Andrew Freedman Home, a sprawling mansion in the South Bronx. A former senior center, the mysterious estate has been described by the NY Times as "the Grand Concourse's grandest building" and, later, following years of decay, "like I was in 'The Shining." Tonight, the venue plays host to a bizarre sort of supper club: The Annual Bronx Pipe Society Small Game Dinner.

When I enter the hors d'oeuvres room, a camouflaged man is handing out crickets and silkworms, and explaining that "bug-shaming among the intelligentsia is a real problem, but soon we'll be competing for these guys." The self-professed bug evangelist hands me a stamp-sized thoracic muscle of a waterbug, and it quickly becomes clear that fussy eaters like myself have no business attending this dinner party. The muscle is brackish, surprisingly meaty and, as one guests puts it, "basically like eating a cockroach."

I pop my first two Tums of the evening and get in a cocktail line behind a man holding a large white goblet. "Ivory?" I inquire, dimly.

"Made it from 10 different people, actually" he says, identifying the femur, seven molars, calvaria, and occipital bone, "which is like the base of your skull." I nod, touching the back of my head and recalling a warning I'd received earlier that day from the party's host: Our guests are dangerous, heavily weaponized monsters.

Now in its seventh year, the small game dinner is the creation of a man known as Baron Ambrosia, a towering figure and unofficial "culinary ambassador" of the Bronx. Every year, he tasks about a dozen local chefs with creating a dish made from "challenging" meats, including bobcat, raccoon, weasel, coyote, beaver, porcupine, bear, and more. The finished product is tonight's dinner, an invitation-only affair for 150 Bronx luminaries and other friends of the Baron.

By 8 p.m., the spacious hall is packed with dapper carnivores. The dress code is black tie, though the invite also allows for hunting attire, supervillain funeral garb, and costumes inspired by The Garden of Earthly Delights (panel unspecified). I spot a shirtless man in a bird mask lock arms with a woman in a flowing black gown. Nearby, a man in a fox pelt fidgets with a steel trap, coaxing onlookers to test their agility. As the first tray of meat is placed next to the skull of a coyote, a tuxedoed gentleman vaguely resembling Anthony Hopkins brings a pipe to his blood-smeared mouth and exhales approvingly.

More trays arrive, and I'm handed a heaping bowl of Cow Heel Sousse, gelatinous and smelling like feet. Someone is chanting now, accompanied by the percussive rhythm of heavy rain beating against the windows of this obviously haunted mansion. As I push the heel around in the bowl, the Hannibal Lecter-looking man eyes me suspiciously.

It's at this point in the evening that I begin having second thoughts. 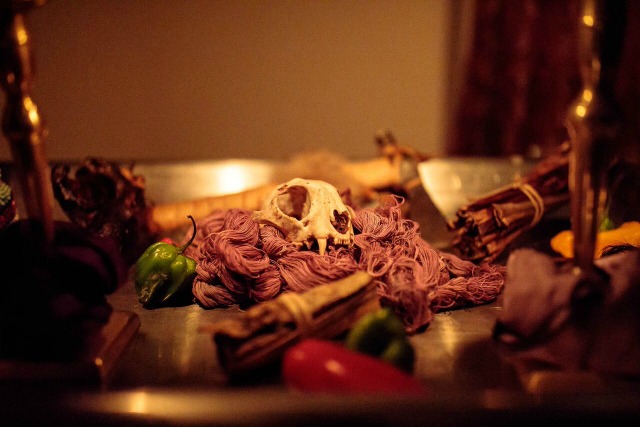 If you're not at the table, you're on the menu (Tod Seelie)

There are no humans on the menu, the Baron assures me, though there is quite a bit of bobcat. The cats had come to the Baron by way of the northwest Appalachian mountains, where they'd had the misfortune of crossing paths with Trapper Bill, a fur man. Bill gave the carcasses to the Baron, who then butchered the whole animals in his backyard, before dropping them off with two Guyanese chefs he'd never met. The two chefs, Jennifer Garib and Savitri McCrea, then spent nine hours simmering the meat in herbs and spices—an indigenous Guyana recipe remixed with a non-indigenous feline predator.

The resulting Pepperpot Bobcat, a garlic-heavy stew with a syrupy sauce made from cassava root, is one of the night's most popular entrees. It's served family style, in the dark and echoing ballroom where we take our seats at around 10:30 p.m. A tray of raccoon and okra sushi appears, and my neighboring diner quickly grabs a piece. "A bit gamey," he says, and reaches for more bobcat.

As friends of the Baron scurry to and from the kitchen, our host addresses the ravenous crowd. "I started this dinner as a way to honor the animals," he says, noting that fur trappers typically discard the meat of their catches. "But also to bring people together who wouldn't otherwise break bread at the same table." He thanks his "teacher of the forest" Trapper Bill, and all of the wonderful mothers who made this event possible.

A pungent tray of grey fox pappardelle and fermented apple arrives at our table, along with a second plate of green beans. "What animal pissed on these?" my seatmate asks, just as I'm taking a bite of the beans. I excuse myself for a second glass of moonshine, under the misguided notion that liquor will distract my queasy stomach. The home brew has been soaking for months alongside the head of a gator named Sobek, from which it now gushes. The drink tastes like swamp water, but the other booze options involve beaver anus or bear paw, so I cut my losses.

Next to the Sobek fountain, I find Trapper Bill. He's sporting a baja sweatshirt and red coyote cap, a long white goatee and a mink penis bone in his ear. Having earlier met a man with a raccoon penis earring, I'm able to impress Bill with my knowledge of relative critter endowments. He offers me a Red Dog beer from his secret stash, and tells me how he hates New York City, but drives out once a year just for this event.

"The way the chefs prepare all this stuff is way more interesting than I would at my house," he says, adding that he lives in the woods of northwestern New Jersey. "You know, I think I've convinced this fellow to come out there and trap with me," he adds, pointing to a man I soon learn is Grandmaster Melle Mel—one of the founding fathers of hip-hop, and the songwriter behind "The Message," widely considered the first great rap anthem. "This is about survival, this shit is the future," the grandmaster exclaims, before returning to his bobcat.

And so, on the grandmaster's recommendation, I finally end up sampling the bobcat. It's tangy, with a hint of cinnamon and just as delicious as everyone says. I pluck the bones from my mouth, and try to push the thought of my beloved housecat from my mind.

Before heading home, I find my human chalice friend sitting in the library, vaping. His name is Adam Hutter, he tells me, and he owns an oddities trading business in Philadelphia called the The End Times Boutique. (He assures me that the chalice is made from legally-obtained medical cadavers.) I ask if he's enjoying himself and he says that he is: "Feeling like an apex predator, it's a truly powerful thing."