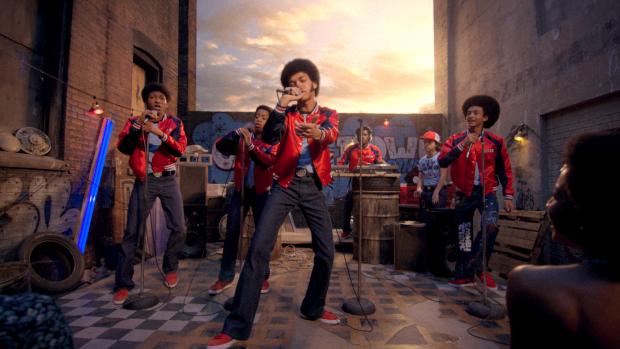 DNAinfo:  8 Things You Didn’t Know About Filming ‘The Get Down’ on Location in NYC

The first six episodes of the Baz Luhrmann series “The Get Down” debuted on Netflix a couple of weeks ago, immersing viewers into a fantastical version of 1977 in the South Bronx — a world of graffiti, disco and hip-hop.

About 85 percent of the show — which also intersperses old video footage of The Bronx between scenes —  was shot on location in New York City, said Amanda Foley, the location manager for the show’s first season.

Some scenes were shot in the South Bronx itself, including those in St. Mary’s Park in Mott Haven, which is also the area where the kids on the show go to school. Additional locations were further north in the borough. The church heavily featured in the show is at Jerome and East Tremont avenues in Mount Hope, Foley said.

But other scenes were shot in East New York and parts of Queens. This was largely because the South Bronx no longer looks the way it did in the ‘70s.

“You’d have like three buildings in a row that were completely great and period [appropriate]… and then you’d be surrounded by brand-new modern buildings,” Foley said.

“We really, really wanted to be true to the story and where these kids lived,” she said. “But ultimately we just couldn’t find it in the South Bronx, so we had to get creative and make these other locations work for the vision Baz had originally.”

Foley talked to DNAinfo New York about the ins and outs of filming “The Get Down” on location in New York City:

1. The train tunnels and rubble fields as seen on the show were in East New York. The exterior for club Les Inferno was also in the neighborhood.

Foley: “The [Les Inferno] interior is on set; it was on stage. And the exterior was in East New York, under the train, by the train…. We were by the Long Island Rail Road and the L train. It’s basically… right near Atlantic Avenue.”

2. Shaolin Fantastic’s two “hideouts” were filmed in two different spots: one in East New York and the other in the Andrew Freedman Home on the Grand Concourse in The Bronx.

Foley: “His first place … is an abandoned tenement. We built the interior, but the exterior… was also in East New York by Eastern Parkway. And then he moved into the Andrew Freedman house.... It is an actual building and they have artist rooms on the second and third floor, and [DJ] Kool Herc has a room there that he uses for … his music and art.”

3. Location scouting for “The Get Down” posed some unique situations unlike those encountered while filming other shows, such as “Boardwalk Empire,” which Foley previously worked on.

Foley: “On 'Boardwalk,' it was looking for these old beautiful preserved buildings. For this, it was looking for rubble fields, what The Bronx used to look like. Literally, The Bronx is burning. And we needed to find just streets that are run down and dirty and the buildings are falling apart. It’s really hard to find that in The Bronx now.

4. Scenes inside a recording studio were filmed at Avatar Studios in Hell's Kitchen.

Foley: “They’re so friendly, really helpful. They helped us set it up the way that it would have been set up in the ‘70s.  They have the original board that they used in the ‘70s — it was great.”

5. The Kipling salon seen on the show was created near the show’s stages in Glendale, Queens.

Foley: “Right next door to us, there are a few abandoned buildings that we took over and turned into the Kipling salon. So technically it was a location, but the nice part about it was that it was so close to the stages.”

6. Scenes featuring footage of trains rolling by were done via visual effects. The scenes that showed actors actually on the trains were shot in two locations: The Transit Museum in Downtown Brooklyn and an abandoned train at the Queens County Courthouse.

Foley: “We had to find creative ways to make the train work because MTA will not allow you to put graffiti on their train. So when we shot at the museum, we were not allowed to put any kind of graffiti. We had to do that all in post [production]. But the train that we were able to put graffiti on… [was] the one at the Queens County Courthouse. That’s why we ended up there.”

7. Scheduling time to film on the trains could be tricky — particularly at the museum because of other film shoots going on there.

Foley: “You’ve got to be able to call in advance and get in their calendar. And they only allow filming certain hours, and I think it’s only on Mondays… because the museum is closed. And then the one at the Queens County Courthouse — they’d never really had filming there.... Ultimately everyone wanted us there and they were great about it, but it was just getting through all these different agencies… to try and get permission to film there.”

8. A lot of research went into creating “The Get Down” and that meant that there was already a database of information available to the crew as they got started on the show.

Foley: “[Baz Luhrmann had] been working on this and thinking about this for years and years and years. So he already had a whole database — amazing database of research from costumes to locations to everything…. And then, as the scripts started coming out, [production designer Karen Murphy] and I would just look at these locations and we’d look through the database. If it wasn’t there, then we’d do our own research.”