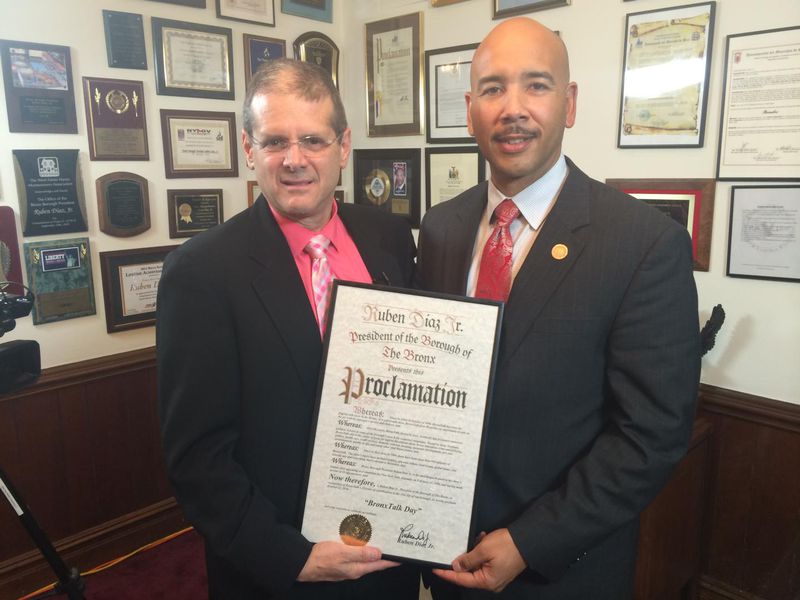 It's been two decades of talking Bronx for Gary Axelbank and his politically-minded cable access show "BronxTalk."

The inquisitive 60-year-old talk show host will celebrate his 20th year on the air Oct. 22 with the taping of a "best of"-style episode at the historic Andrew Freedman Home on the Grand Concourse.

"I never stopped to look back and count," Axelbank said of his 951 shows. "But looking back at some of the archival footage I know every show that's aired is the show that I thought we should do that week."

Over the years, Axelbank has hosted countless political debates and interviewed borough presidents, lawmakers, mayors, artists, and fellow journalists about current events and pretty much anything Bronx related.

The show airs weekly on BronxNet, a public access cable channel based on the campus of Lehman College.

"BronxTalk is successful in great part because it is born out of the BronxNet model and mission of public service, education, and community engagement," said BronxNet executive director Michael Knobbe.

When he's not grilling politicians or policymakers, Axelbank works as the sports development and information director for Monroe College.

"Gary is a tough interviewer, but he is always respectful, and he obviously cares deeply about the issues that face our borough and the people who live here," said Borough President Ruben Diaz Jr.

The Beep, BronxTalk's most frequent guest with 22 appearances, bestowed Axelbank with a proclamation honoring the host's achievements last week.

"I'm proud to be the all-time leading guest on BronxTalk, and I congratulate Gary Axelbank on 20 years of success," Diaz added.