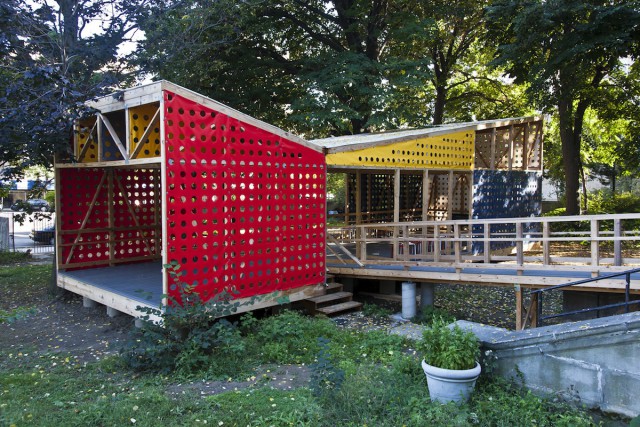 artnet news:  Terence Gower Finds a Use for Modernism by Blake Gopnik This is SuperPuesto, a kind of architectural folly designed by Terence Gower as part of Beyond the Supersquare at the Bronx Museum of the Arts. The pavilion is inspired by the casual, undesigned hawkers’ stalls that crop up in Latin America, crossbred with Marcel Breuer’s classic House in the Museum Garden, built for the Museum of Modern Art in 1949; in the Bronx, Gower’s hybrid has been made available as a meeting place for the museum and local community groups. But when I stopped by, as at most other times, the pavilion was empty, and a little bit poignant in its idleness.

It makes a point that Modernists had a hard time grasping: That good architecture doesn’t try to create needs where there aren’t any (say, by putting a capital city in the middle of Brazil) but instead responds to real needs that already exist (as when a hawker needs shelter from the sun in Mexico, or when a community group needs a meeting place in the Bronx.) By spending a fair amount of its time empty, and then sometimes filling up, SuperPuesto can seem both use-less and use-full, as though meant to explore the distinction.

Its siting also helps it talk about buildings and their use-value: The pavilion is on the grounds of the lovely Andrew Freedman Home, opened in 1924 to fill an urgent need to provide shelter for “a neglected, and too often overlooked class of persons whose prosperous past, whether due to inheritance, good fortune, or inpidual effort, made it emotionally difficult for them to face dire reduced circumstances brought by ‘the slings and arrows of outrageous fortune’ ” (their “welfare housing” came with servants, a ballroom and gourmet meals). With the disappearance of that social category, the house, for all its beauty, seems to have had a hard time putting itself to good use. Its grounds, including the space under and around Superpuesto, seem most friendly to a crowd of gorgeous feral cats. Although that use, I guess, is as good many others. (Photo by Lucy Hogg)

For a full survey of past Daily Pics visit blakegopnik.com/archive.

Follow Artnet News on Facebook: Want to stay ahead of the art world? Subscribe to our newsletter to get the breaking news, eye-opening interviews, and incisive critical takes that drive the conversation forward.