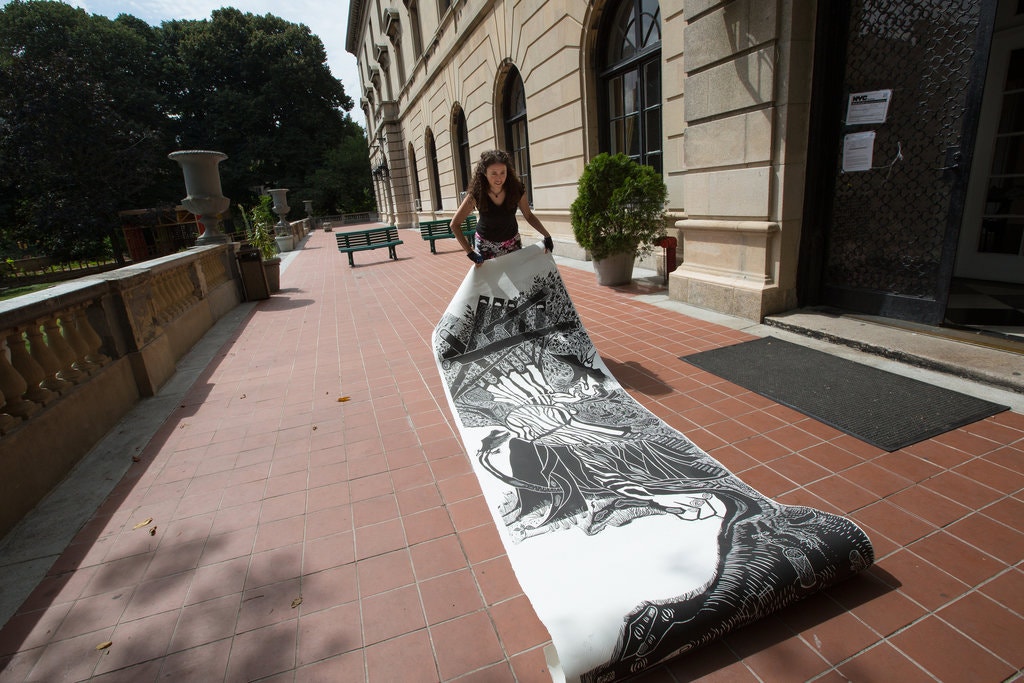 New York Times: At Work in a Bronx That Brims With Creativity

Tammy Wofsey, among the 80 artists featured in the photography exhibit “The Bronx Artist Documentary Project,” unrolls one of her linoleum-cut prints.Credit...Ruth Fremson/The New York Times

Lazarus Nazario started painting more than two decades ago in the East Village, but like many other artists she was forced to move by rising rents, to Chinatown and, later, Staten Island and New Jersey.

Ms. Nazario returned to the city in 2012 to an unbeatable deal: $1,245 a month for a sunny, three-bedroom prewar apartment with a view of magnolia and cherry trees. The catch? It was in the Bronx.

“I saw all the space and said, ‘I can do this,’ ” said Ms. Nazario, 45, who paints images with subversive political and cultural themes. “It’s tough. You tend to feel more solitary because there aren’t so many artists right around here.”

While the Bronx may not be Chelsea or Williamsburg, it has attracted dozens of visual artists, photographers and performers in recent years with relatively affordable rents and an abundance of industrial buildings that can be pressed into use as studios. Many community leaders say that the influx has reinvigorated struggling neighborhoods with newcomers who promote cultural activities, and renewed focus on the arts in a borough that has been home to Milton Glaser, Larry Rivers and Daniel Libeskind, among others. 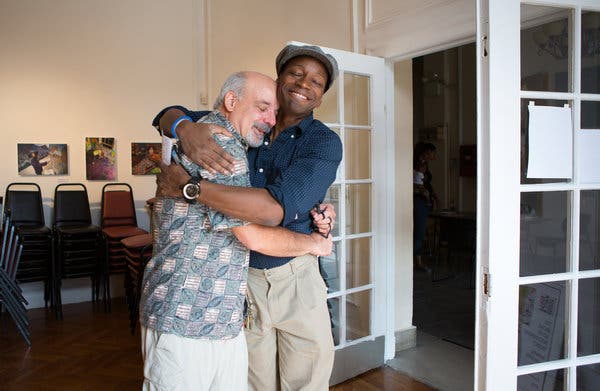 Daniel Hauben, left, who conceived of the exhibit, and Walter Puryear at the Andrew Freedman Home.Credit...Ruth Fremson/The New York Times

A new photography exhibit at the Andrew Freedman Home on the Grand Concourse highlights this growing Bronx arts community. Called “The Bronx Artist Documentary Project,” the exhibit, which runs through Oct. 8, features the work of 30 photographers who recorded 80 artists as they engaged in their creative process over the past year.

The exhibit was conceived by Daniel Hauben, 58, a Bronx-born painter. He worked with Michael Kamber, the director of the Bronx Documentary Center, who curated the exhibit, recruiting photographers to shoot more than 20,000 pictures of Bronx artists. Mr. Hauben said the group raised $25,000 in donations to cover exhibit costs, and is aiming to raise another $25,000 to publish a book of the photos.

The goal, Mr. Hauben said, was to bring together the artists and photographers spread out across the borough and provide them with more opportunities for collaboration, as well as to tap into what he saw as an often overlooked cultural resource represented by the Bronx. “I always wondered who might be out there,” Mr. Hauben said. “There were decades when I worked here in the Bronx and it seemed I always knew the same handful of people.”

Mr. Hauben created an online application for the project, and received more than 100 responses from artists at various stages in their careers, from those like Ms. Nazario, who works as a waitress to help cover the bills, to more commercially successful artists who have countless gallery shows under their belt. Mr. Hauben, who hosts a Bronx cable show about art, and other organizers selected only artists who worked in the Bronx, who created something permanent and tangible, and whose work did not rely entirely on computers, among other criteria. Then he mapped out where the artists worked, identifying clusters in neighborhoods including Mott Haven, Hunts Point, City Island and Riverdale. 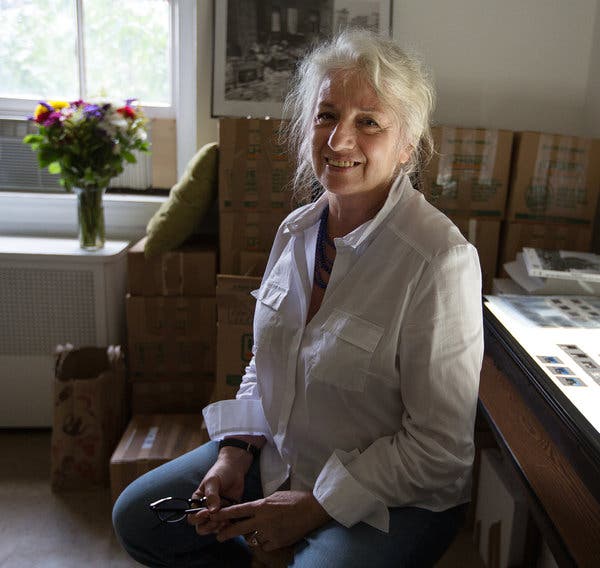 Lisa Kahane has assembled a treasure trove of Bronx history with her photographs of the borough.Credit...Ruth Fremson/The New York Times

One such cluster has sprung up around the Andrew Freedman Home, a former retirement home for the once-wealthy that has been reimagined as a cultural center and artists’ colony in the past two years. The home, which is operated by the Mid-Bronx Senior Citizens Council, provides free studio space on the second floor to 18 artists and up to $500 a month for materials. In return, artists are required to spend at least 20 hours a month engaging the community through art development, said Walter Puryear, the director of the home.

Michele Brody, a mixed-media installation artist, displays quilts she weaves out of stained tea-filter paper, which she creates with local residents. Every Saturday, she serves tea to visitors at the home, then passes around tea filters for them to write on. One older woman from the South Bronx scribbled that her “daddy preferred Tetley to Lipton.” A man in his 40s, who grew up nearby, recalled that his parents would tell him to stop playing or yelling when he walked by the home, out of respect for the elderly inside.

Ms. Brody, 47, moved to the Bronx last October from Harlem, where she worked mostly in her apartment. She said her new home was a better fit for her community-based art. “For 18 years, I was in Manhattan,” she said. “It seemed like the center of the art world, but you can be surrounded by eight million people and feel alone, and that’s what I felt because I was in my own little world. There were days I would never leave my apartment.”

Down the hallway at the Andrew Freedman Home, Lisa Kahane has assembled a trove of Bronx history in her photographs of the borough, which she has been taking since 1979. Ms. Kahane, 68, who relocated last month from the Flatiron district in Manhattan, shot three of the artists in the exhibit, spending an average of eight hours with each one. “Art is a bit of a mysterious process,” she said. “Some people think it isn’t work. I think we shed light on both the mystery and the work that go into it.” 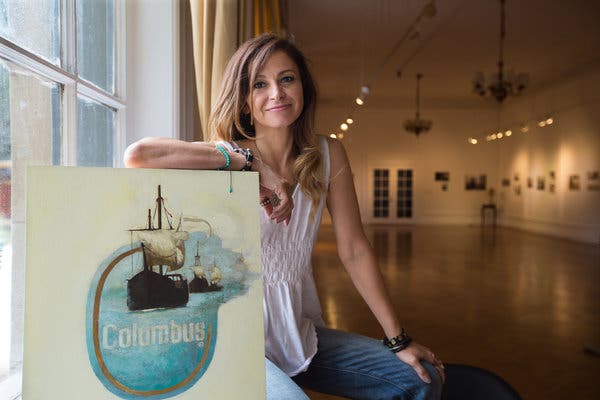 Finding an unbeatable rental deal in the Bronx, Lazarus Nazario returned to New York in 2012.Credit...Ruth Fremson/The New York Times
In nearby Mott Haven, Ryan Garvey, a mixed-media artist, volunteers at a neighborhood gallery, BronxArtSpace, when he is not out roaming the streets collecting bits and pieces of Bronx detritus for his artwork. He has recycled tattered water balloons left behind by children, which he included in paintings, and plastic bags used in drug deals, for collages. He works in a two-bedroom brownstone apartment that doubles as his studio.

Mr. Garvey, 33, who grew up in Boston, said he jumped at the chance to live in the Bronx after his wife got a job in Stamford, Conn., in 2011. “I had a fascination with the Bronx before moving here,” said Mr. Garvey, a fan of hip-hop and graffiti. “I was excited to live in the place where things that I loved so much were actually created and invented.”

Another Mott Haven artist, Helena Starcevic, takes the subway from her apartment in Greenwich Village at least four times a week to make ceramic sculptures in a large airy studio with a view of the Harlem River. Ms. Starcevic said that when she started looking around for a studio in 2011, her other options had included a small cubby in Manhattan, a big room shared with many others in Brooklyn, and raw space in Queens.

Ms. Starcevic, who shares her Bronx studio with two other ceramic artists, said that she had watched sunsets, snowfalls and lightning strikes, all while seated at her table, shaping forms from clay, by hand. Sometimes she takes the pieces over to the window to work on them there.